How to use information about interactions in HADDOCK?

Back to main best practice page

As you probably saw in the previous step there are many ways how to obtain structures of molecules that you want to dock. The next step is to define the way you expect these molecules to interact. HADDOCK is an information-driven tool, which means that the more available information about binding you have, the more meaningful your results will be. Based on the available information we distinguish between following options:

What information about binding is available? 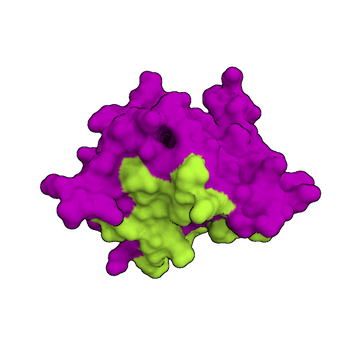 1.) Information about the interface is available

If your predictions are highly reliable and you wish to have all of them applied during docking, define them a unambiguous restraints. These can be for example template-derived pairwise distance restraints (tutorial), MS crosslink data (tutorial) or cryo-EM connectivity data (tutorial).

Nevertheless, as in life, in science one also needs to be somewhat critical to the data one works with. If you are not 100% sure about the interaction information and want to be cautious while incorporating it into your docking, use ambiguous interaction restraints, unique for HADDOCK. Here, for each docking trial a fraction of these restraints will be randomly removed, which ensures a wider sampling satisfying always a different subset of predefined restraints. Thus, if some of the restraints are artificial, these can be filtered out if the complex satisfying them is unfavorable.

For AIRs, it is important to define the residues at the interface for each molecule based on experimental data that provides information on the interaction interface.

In the definition of those residues, one distinguishes between "active" and "passive" residues.

Ambiguous distance restraints are described in the HADDOCK manual and more about parameters in the run.cns file is written here.

Other kinds of restraints

HADDOCK can utilize plenty of experimental information. Here we describe other types of restraints supported by HADDOCK:

2.) Information about the interface is not available

Information about the quaternary structure of proteins (symmetry)

HADDOCK offers the possibility to define multiple symmetry relationships within or in between molecules. This is done by using symmetry distance restraints. By defining multiple pairs of distances between the CA atoms of two chains, various symmetries can be enforced. Symmetry restraints are described in the manual here.

They are described in the HADDOCK manual here.

HADDOCK offers to define random AIRs from solvent accessible residues (>20% relative accessibility) in case there is no experimental information. The sampling will be done from the defined semi-flexible segments. This can be useful for ab-initio docking to sample the entire protein surface. To ensure a thorough sampling of the surface, the number of structures generated at the rigid-body stage (it0) should be increased (e.g. 10000), depending on the extent of the surface to be sampled. These random restraints are described here.

Random interaction restraints are used in the binding site tutorial.

Surface contact restraints can be useful in multi-body (N>2) docking to ensure that all molecules are in contact and thus promote compactness of the docking solutions. As for the random AIRs, surface contact restraints can be used in ab-initio docking; in such a case it is important to have enough sampling of the random starting orientations and this significantly increases the number of structures for rigid-body docking. They can be useful in combination with random interaction restraints definition (see above) or in refinement of molecular complexes. They are described in the manual here.

When we are less certain about the of the interacting residues, it is better to enhance sampling by increasing the number of structures generated in each phase of docking.

More about optimal settings for different docking scenarios can be found here.

In HADDOCK2.4 webserver active and passive residues can be entered manually or in a tbl file of ambiguous and unambiguous restraints.

Such restraints file can be generated in the GenTBL server and can be further used when using HADDOCK locally, since it is already CNS-formatted.

Use of the HADDOCK tools is also described in the local HADDOCK tutorial.

In bonvinlab a number of complementary webservers have been developed to help users to reevaluate restraints.

CPORT is an algorithm for the prediction of protein-protein interface residues. It combines six interface prediction methods into a consensus predictor.

DISVIS visualizes and quantifies the information content of distance restraints between macromolecular complexes.

Any more questions about restraints for HADDOCK? Have a look at the HADDOCK bioexcel forum hosted by

. There is a very high chance that your problem has already been addressed.